Jamshedpur FC after missing out on two Title wins will be looking to start the ISL 2019 on a high note. Today they will be up against Odisha FC(Earlier known as Delhi Dynamos. THey had to change their home state because of the financial cost of renting the stadium was too much.).

“We will try to defend when they attack us. But our goal is we would love to have the ball more in 90 minutes than our opposition. For us, the most important thing is to make our fans happy with our style of play,” said Iriondo.
“Last season is over. Now we start a journey at a new club in a new city. A lot of players are the same and I think we have a good squad. All the signings are done to improve the squad and I think we have a complete team,” Gombau said.

Venue of the Match:

The ISL match between Jamshedpur FC and Odisha FC will be played at the JRD Tata Sports Complex, Jharkhand on 22/10/2019.
The match will begin at 7:30PM

coming soon.
Note: Don’t forget to edit your team after the playing 11 is out so that you don’t have any players in your fantasy team that are not playing.
Join Telegram & Get Instant Loots & Tricks 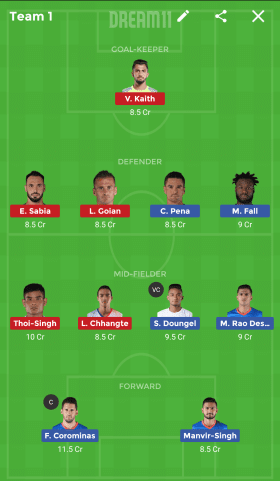