India and West Indies will lock horns in the final ODI match of the series. Which is also the decider as both the teams have won 1-1 matches. It’s hard to tell which team will emerge victorias as both matches were one-sided. In this fantasy dream11 prediction I will tell you about the pitch conditions, what will be the best choices for your fantasy team and more.

The match will be played in Cuttack at Barabati stadium. The pitch is good for batting. The last time India played there they scored 381 runs against England. Fast bowlers will also find some assistance for swing with the new ball.
The pitch will also support the spinners as the game progresses.
The chasing team has better winning chances.
“The pitch looked light brown 24 hours out from the match and is expected to grip for the spinners. The dew in the second innings though will make batting easier. 11 out of 18 matches have been won chasing here, so it shouldn’t be a brain-racker to bowl first. How much inspiration are teams willing to take from India’s bat-first total of 381/6 against England in 2017 remains to be seen.”- Cricbuzz 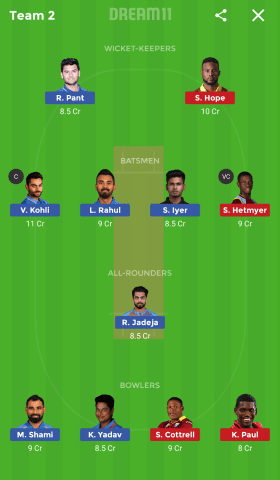